Mountain bikers ride up the Cholla Trail in the Aliso and Wood Canyons Wilderness Park April 29, 2008. (Los Angeles Times)
The Times Editorial Board 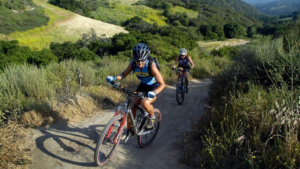 The federal Wilderness Act of 1964 was not vague about its intent: to protect significant and as-yet unspoiled land and wildlife habitat from the ravages of “an increasing population, accompanied by expanding settlement and growing mechanization.” Humans could visit, but only under certain conditions, and they couldn’t stay permanently
Preserving land and seeking to maintain it as close to its “natural condition” as possible required developing strict access rules: Everyone is welcome to trek through designated national wilderness areas provided they use their feet or those of horses or other pack animals. No motor vehicles or boats, nor “other form of mechanical transport” are allowed. Years later, the Americans with Disabilities Act made wheelchairs an exception.

Now, Congressman Tom McClintock (R-Elk Grove), who represents wilderness areas in the Sierra Mountains, is proposing a rule change to allow mountain bikers to cruise through the approximately 109 million acres of land designated as wilderness across the country. Game carts, strollers and wheelbarrows would be welcome too.
It’s a bad idea — if for no other reason than it cracks open the door for other changes that violate the spirit of the Wilderness Act. If you say yes to mountain bikers, how do you say no to mountain skateboards (yes, they are a thing)? Or to hang gliding and parasailing, activities that also are excluded from wilderness areas? Or snowmobiling and power boating? These lands were not set aside to be playgrounds for humans, but to preserve their continued existence as wilderness. Besides, wilderness areas account for just one-sixth of federal public lands, leaving plenty of other outdoor space for biking and other forms of human recreation.

We should be even more careful about these areas in light of recent attacks on protected public lands, including the Arctic National Wildlife Reserve and two national monuments in Utah, all of which are being opened up for destructive uses like drilling and mining.
McClintock says this bill is simply a restoration of the “original intent” of the Wilderness Act. Sorry, that’s fake news. Just ask Edward Zahniser, a former park official and the son of the man who wrote the original act. “How could they possibly say the original act allows this? They are just making it up,” he told the Los Angeles Times. Bicycles are clearly an example of the “mechanized transportation” barred by the act, and were hardly unknown in 1964 when it was passed.
Hikers and conservationists aren’t thrilled with the prospect of opening wilderness trails like the Pacific Crest Trail to mountain bikers. But not all mountain bikers are cheering it on, either. The International Mountain Bicycling Assn. decided not to support McClintock’s bill, saying, “Public lands are being threatened at an unprecedented level, and it’s imperative that public land users come together to protect these cherished places.”
A clutch of mountain bikers is probably no more destructive to the wilderness environment than a horse train (though it may well destroy the peace and tranquility of the hiker who finds herself on a narrow mountain trail with a pack of mountain bikers bearing down). But relaxing access rules is a path that leads to, well, more paths. And then roads. Pretty soon, you have cars and restrooms and escalators and gift shops and not a whole lot of wilderness left.