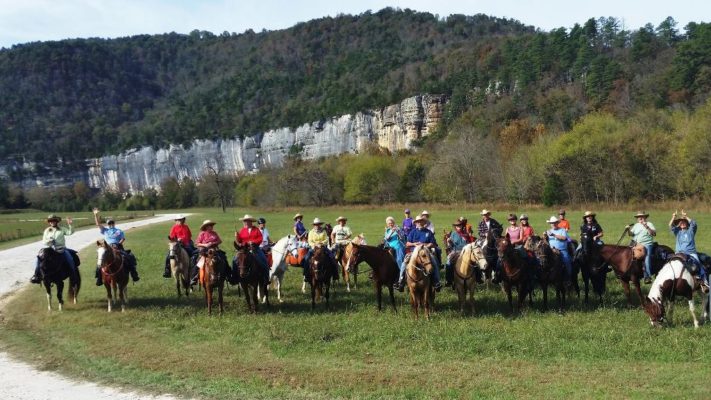 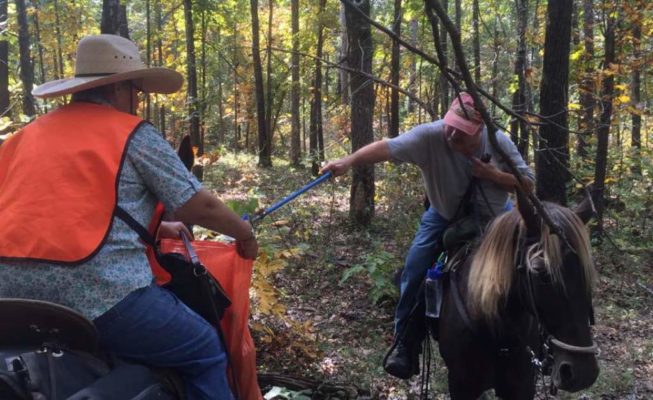 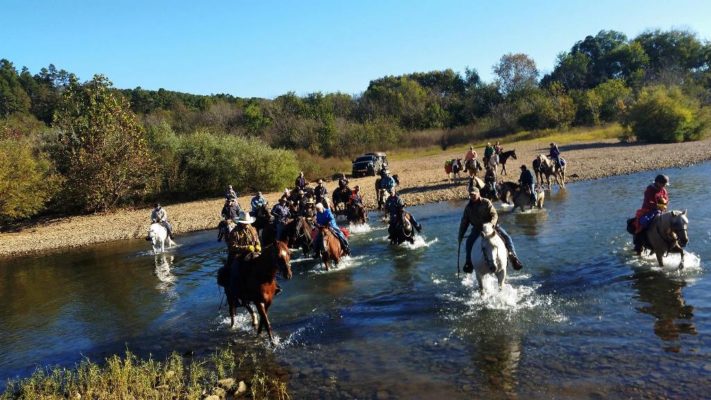 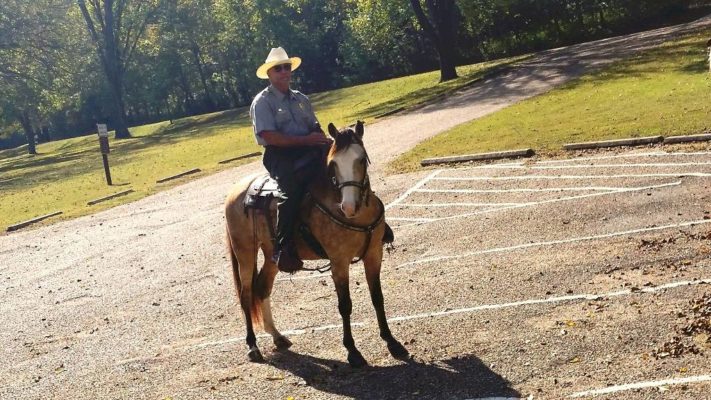 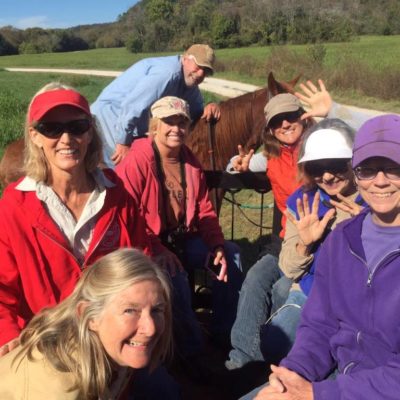 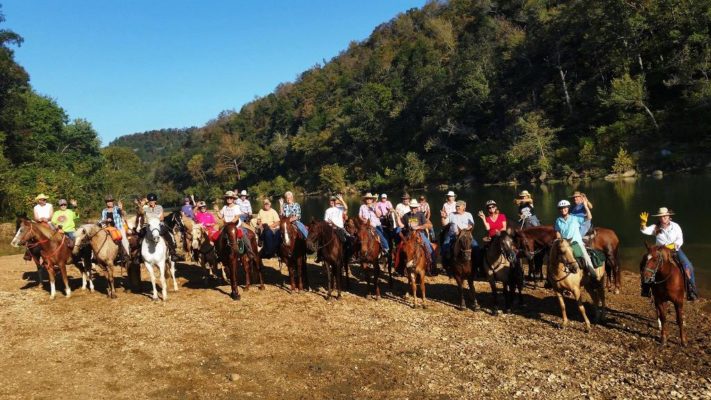 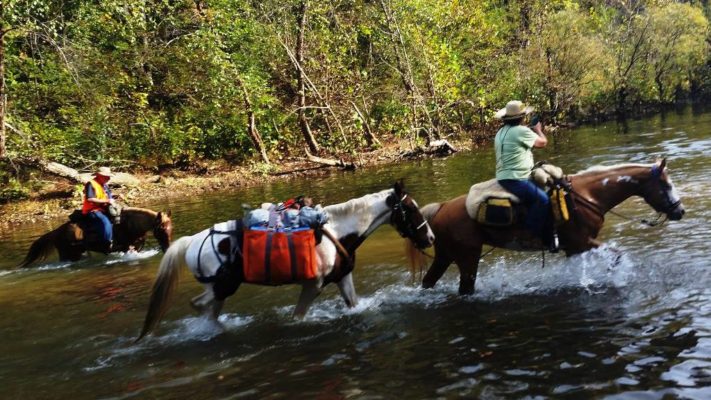 A year of planning, months of scouting and grooming trails, and 11 days and 133 miles of camping and riding on the Buffalo National River in northwest Arkansas. Those are the stats, but the numbers don’t begin to tell the story of what members of the Buffalo River BCHA are calling their trip of a lifetime.

Plans for the Buffalo National River BCHA Centennial Ride and Clean-up began almost a year ago when Park Superintendent Kevin Cheri invited the group to participate in the 100 year birthday celebration of the National Park Service. As a local chapter of BCHA, our primary focus is maintaining the trails of the Buffalo National River and its watershed; so, it was easy to decide how best to honor both the NPS and our beloved River. We would ride and camp the length of the river from the White River to Ponca, picking up trash and cleaning trails as we went. Now, this may not be everyone’s idea of a good time, but as fellow Back Country Horsemen and trail enthusiasts, you will understand that this had all the makings of a perfect birthday party!

Of course, there were a few challenges in staging such an event. First, there is no contiguous trail running the length of the Buffalo. While sections of the more traveled upper River are easily accessible and clearly blazed, the “trail” grows increasingly dim downriver, so that in its lower reaches it is a poorly defined hodgepodge of options that includes old logging roads, grown up fields and private property, paved highways, and hiking only trails. Thanks to our very determined Ride Committee, Nancy Deisch, Arlus Trice, and Ted Spears and our president, Elaine Appel, who all spent months scouting the best route and negotiating with the Park Service for a special permit that allowed access to some areas normally off limits to horses, we were able to stitch together a workable route that took us through some of the most beautiful, rugged and remote country imaginable. When the Park Service and several private individuals graciously offered overnight accommodations at strategic points along the way, we knew the stage was nearly set for a truly once-in-a-lifetime celebration.

The only challenge left was the logistics of setting up nine different camps in an environmentally sensitive way and moving needed camping gear and equipment forward each day. Enter Aaron Darnell and his top notch Lower Buffalo River Shuttle Service who solved that dilemma. With the exception of one layover day at the Woolum Horse Camp, most riders were up every morning at 5:00 a.m., preparing themselves and their horses for the day’s ride. At 7:00 about half of the group would move equipment and trailers forward to that day’s destination where they would be met by one of Aaron’s reliable employees who would collect them all in a small bus and bring them back to the trailhead. Meanwhile, those left at camp would be busy completing camp chores that included tidying up, scattering manure and extinguishing campfires. All of our members try to adhere to Leave No Trace principles, so the extra care to leave a clean camp was important to us. Several members of our group who weren’t able to ride the entire trip joined us for day rides, and they also benefited from Aaron’s shuttle service.

Two members, Ginger Charles and Beth Gierman, each brought along an extra horse and packed all their gear, including tents, so they did not require shuttling.  Watching the “pack girls” maneuver their little string of horses through some very tight, steep places in the trail inspired all of us as we traveled the 133 miles of the River.

The much anticipated and well planned ride began, auspiciously, on October 15, under the light of the full moon at Hathaway Horse Camp on the lower Buffalo, and it ended on October 25 at Ponca on the upper end of the river with Superintendent Cheri there to congratulate us on our successful journey. These were important, memorable occasions, but most fellow riders will understand that it’s what happened in between those dates that is hardest to explain and that leaves the most indelible memories: Guitar strumming and shaky attempts at three part harmony around the crackling camp fire (Thank you Donna and Max). Stories that stitched and bonded us together, answering the question of how we came to share this love of horses and wild places. Tales told on the trail and under the Milky Way about the old home places we rode quietly past, told by those who knew what it was to once roam free in the deep hollows and steep hills along the river (Thank you Ricky, Chad, Ted, Susan, Arlus, and even Uncle Ed). Visits from “trail angels” who worked their magic with dutch ovens and makeshift kitchens so that we knew only the comforts of chicken and dumplings, jambalaya, rich pasta, and hot cinnamon rolls and never the discomfort of a hungry belly after a long day on the trail. Such unexpected hospitality that was graciously offered and so gratefully received (Thank you Bobby Alexander, Peter Deisch, Marjorie Heacock, Mike McGee and Peggy Thompson)!

Each of the 28 members who completed all or part of the ride has their own story to tell, but we would all agree that we rode with good fortune at our side every day. The very small glitches that occurred –a bit of engine trouble here, a flat tire there, a lost horseshoe or a broken latigo – only served to knit us more tightly together and provide another reason to laugh after the fact. What we know for sure is that fences came down, spouses and friends stepped up, permits were signed, hearts opened, horses leaned in and stepped out, and the River flowed. And, yes, what about those horses and mules? Our equine partners were all strong, healthy, and willing, and they gave meaning and purpose to our journey.

Maybe the only point of contention would be in choosing a favorite section of trail along the way. Was it crisscrossing Water Creek with its crystal clear waters and towering bluffs, or was it ascending the rocky reaches of Whisenant to find the sparkling Buffalo tucked into endless valleys below? Surely the ride through Camp Orr where two eagles tumbled and soared alongside us would be in the running? Special places like The Cross, Wolf Knob, Doc’s Rock, Blue Hole and the Teacup House were seen with fresh eyes as we were able to take in the River as a whole with what seemed like endless days stretched out before us. And, maybe that is the beauty of an extended trip along the River – we didn’t have to choose; our favorite could be whatever section of trail we happened to be riding that day.

One highlight of our adventure came on day three when we rode through beautiful Buffalo Point, an area that is normally off limits to horses. One of our members, Peggy Thompson, had her good horse Beau saddled and ready so that Park Superintendent Kevin Cheri could escort us through that section of the park. What a fine thing to be riding under the soft, muted colors of fall in the Ozarks in the dappled light of a “hiking only” trail with Kevin in the lead! He left us at Wild Bill’s on Highway 14 where his officers blocked traffic so that we could safely cross and make our way toward the night’s camp at North Maumee and on to the rest of our journey.  It was a full-circle moment with our Back Country riders and the Park Service joining efforts in service of the River, and even now it reminds us of why each of us chose to make this trip. We each have our own story about the work involved, the small sacrifices made, and the minor discomforts endured to make this ride happen. But, as Back Country members, we believe that the trails we love are worth the effort. We hope those trails are a little better because of the work we do. We know our hearts are fuller and our lives are richer because we ride them.

Happy Birthday to the National Park Service and cheers to the Buffalo River Back Country Horsemen.