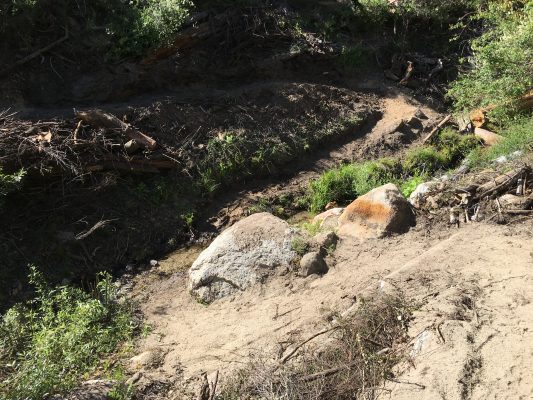 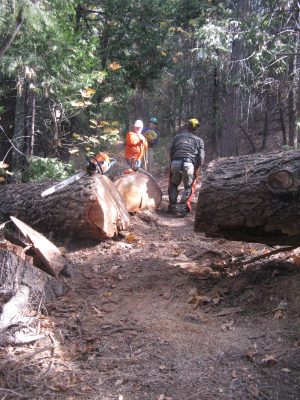 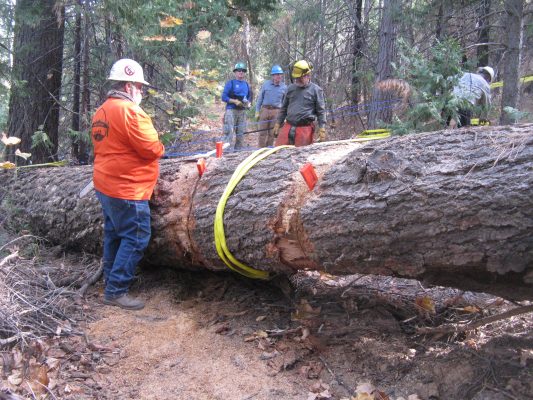 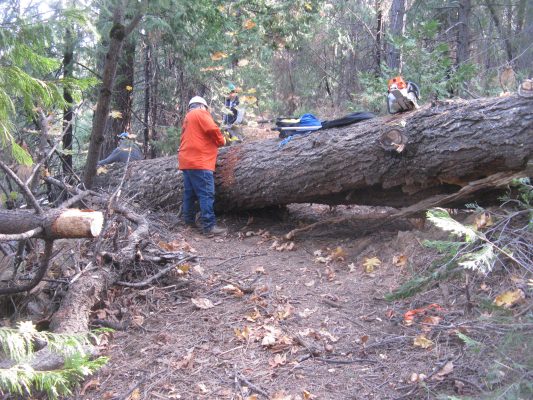 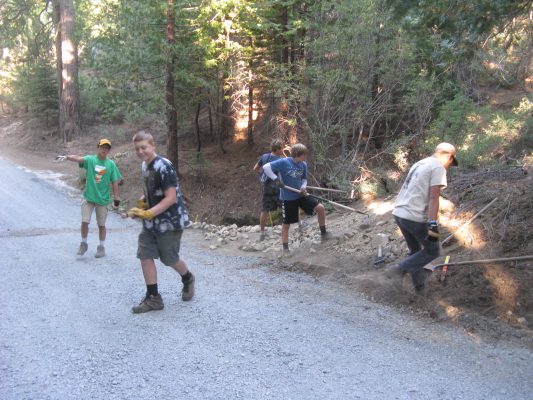 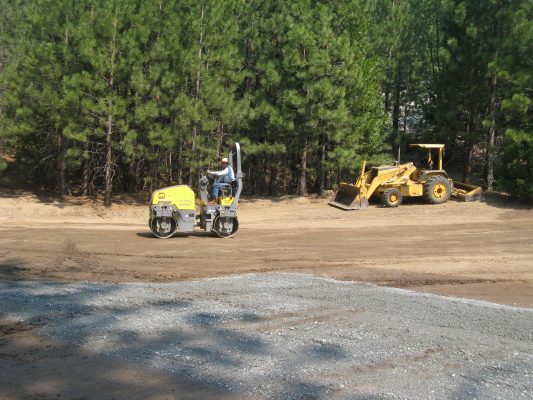 2018 marked the 50th anniversary of the National Trails System Act, so BCHC-MLU partnered with the US Forest Service (Eldorado National Forest) and the California Division of the National Pony Express Association to restore 47 miles of alpine trail between Pollock Pines (elevation 3980 feet) and Echo Summit (elevation 7382 feet). This section of the historic Pony Express (XP) Trail is in a steep granite canyon carved by the South Fork of the American River and shares the narrow corridor with Hwy 50.

Several trail features needed attention and were included in the project, each of which required special skills and equipment beyond the usual sawyer work MLU performs every spring. In these instances, MLU called on friends from other trail organizations in the region to assist and advise our volunteers in developing a variety of new skills (trail rerouting, ford building, grading/gravel install, and rigging/tackle techniques). Such technical assistance and special equipment came from individual members of Elegant Ears Mule Association, Tahoe Rim Trail Association, and Pacific Crest Trail Association.

XP Corral Trailhead First priority was the restoration of the XP Corral Trailhead near the midpoint of the 47 miles to provide a staging area for work parties and provide public access to the trail. This feature was functionally completed in 2018 (stump removal, grading for erosion control and surface hardened with gravel). The finishing work remains to be completed after the 2018-19 winter snowmelt.

Youth & Public Education As soon as the trailhead was functional again, boy scout troops were invited to learn trail maintenance skills and Leave No Trace practices. In July, Troop 466 from Sunnyvale CA pruned vegetation and added trail markers. In August, Troop 186 from Elk Grove placed riprap (cobble stones) in 5 erosion sensitive areas around the trailhead, three of which protected the seasonal creek. Troop 186 returned in October to finish a 6th area of riprap and clean culverts on 12 miles of the trail they adopted. One of their Eagle Scout candidates is creating a trail map for the USFS to pass out to trail users as part of a new USFS Recreational Opportunity Guide (ROG) for the Pony Express Trail.

Kyburz Ford A recent wild fire denuded the mountain above Kyburz CA such that the severe winter of 2016-2017 caused a trail bridge to be totally destroyed by a massive debris slide which closed about 4 miles of trail. The US Forest Service estimated replacement of the bridge would cost $70,000 and would take several years to implement. As a substitute, environmental approvals were expedited to allow the trail to be relocated 150 yards upstream to a spot suitable for construction of a ford.

Monster Log Removal Every winter, trees fall across the single track trail on hillsides that frequently slope at 30-45 degrees, with vehicle traffic below. A few of the trees exceed 3 feet in diameter and require special equipment and training to cut and remove a half ton piece off the trail without allowing it to roll down the hill into Hwy 50 traffic.
One such log appeared on the XP Trail just East of Pollock Pines, which closed 1 mile of the trail. Using grant funds, MLU bought a 32-inch chain saw and some rigging equipment (cables, winches, pulleys, etc.) and conducted training on 1 November. The 40-foot long log was successfully cut where it blocked the trail with its 4-foot diameter trunk. All three pieces remained stable on the hillside and the cutout was parked off the tread so that only a minor S reroute was needed around the cut ends of the log.

Volunteers The MLU volunteers always work hard, but 2018 was especially strenuous. They provided XP Trail improvements valued at more than $142,000 in addition to their usual annual trail maintenance commitments in the El Dorado National Forest and packing support for Desolation Wilderness work crews.

Funding The XP Trail volunteers were financially supported by cash donations from XP-CA and BCHC-MLU, plus portions of three grants from the National Wilderness Stewardship Alliance (NWSA). These funds allowed MLU to purchase equipment or materials (mostly gravel) and reimburse volunteers for mileage. The 2019 finishing work on the XP Corral Trailhead will come from another grant by Bass Pro Shops.

Any BCHA unit wanting to learn how to apply for grants should attend the BCHC 2020 Rendezvous and sign up for the grant writing class being offered by MLU.