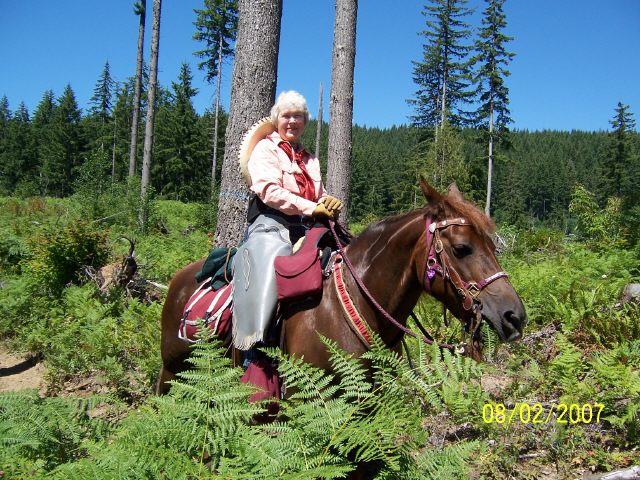 Back Country Horsemen of America is at the forefront of the drive to protect our right to ride horses on public lands, but they wouldn’t be in that position without the tireless effort of people who share their vision. Peg Greiwe grabbed hold of the BCHA mission nearly 30 years ago and still refuses to let go.

“I was the typical city girl in love with horses. I got my first horse when I was 38. My brother bought a four-horse trailer and then proceeded to fill it. My brother taught me a lot about horses,” says Peg.

“In 1987, I went to a show called ‘Horses: A Standing Ovation’ at Tacoma Dome and met some Back Country Horsemen of Washington members who had a booth there. I asked them, ‘Where are the riding trails?’ They said, ‘Join and we’ll show you.’ Talking with them, I realized that was where I wanted to be, so I joined and I’ve been a member ever since,” she says.

“Our chapter usually has a trail ride once month and work parties two to three times a month. Sometimes the older folks or the youngsters think they don’t belong on a work party, but I always tell people, ‘There’s a job for everyone on the work parties. If you can’t wield a Pulaski or a shovel, you can hold a horse or cook food or make sandwiches or do something else.’”

Enjoying the Horses and the Trails

Peg’s husband, Dale Kelley, is one of the charter members of the Pierce County Chapter BCH. His daughter has two teenaged children who rode and camped with Peg and Dale when they were kids. She says, “We live in a rural area outside of town, pretty much in the middle of nowhere. We keep the horses at home. What would be the point in having horses if we couldn’t have them at home?”

Not surprisingly, Peg and Dale ride on the same properties where their BCH chapter builds and maintains trails. She says, “We have a nice local state park, Nisqually Mashel, about 10 minutes away. It’s just raw land the state is trying to figure out what to do with, and we’re helping them with that. So far, we’ve put in some trails that are long enough for a Saturday afternoon ride.”

They also regularly truck their horses to Sahara Creek Horse Camp, managed by the Washington State Department of Natural Resources. Just a stone’s throw from the entrance to Mount Rainier National Park, the camp provides easy access to the Elbe Hills area through the 38-mile Nicholson Horse Trail System, which was built by the Pierce County Chapter BCH. “We have at least one work party there a month. It’s in the foothills at the base of the mountains, so you get the mountain experience without being in the mountains. We can ride there almost all year long,” says Peg.

For longer rides, they make the three hour drive east to the mountains and river valleys of the 1,368,300-acre Gifford Pinchot National Forest and the high elevation lakes and forests in the 169,081-acre William O. Douglas Wilderness. Peg says, “Because of the deep snow, we can access the mountain trails for only a short period of time in the summer. Our favorite place is Keenes Horse Camp and the trails at Mount Adams. We see lots of wildlife – bear, deer, elk, coyotes.”

Jill of All Trades

As time went by, Peg filled all the volunteer jobs there are to do in a BCH chapter: president, vice-president, secretary, treasurer, newsletter editor, volunteer hours recorder, trail scout, and more. She explains how she started working for Back Country Horsemen of America, “Twenty years ago, I was volunteering with my chapter and working for other organizations as an administrative assistant, when BCHA announced they were looking to hire an executive secretary. My husband said, ‘That’s your job!’ I was one of five or so applicants who flew to Reno to interview, then flew home the same day. I was so excited to get the job.”

Peg literally became the voice of Back Country Horsemen of America. “The BCHA phone rings in my home office, and I always answer it, day or night. I get a big kick out of talking to the members. One of our spare bedrooms is called the ‘office annex,’ because all the BCHA brand clothing is stored there, and all the past newsletters are stacked in our garage.”

Also, as Executive Secretary/Treasurer of the Back Country Horsemen Education Foundation, Peg handles the administrative duties of tracking donations, coordinating directors’ meetings, and allocating funds to various projects. She says, “We’ve given lots of grants over the years – close to $100,000. It’s pretty neat to be able to help these people out with their local trail work. We try to limit each grant to $1000 so more groups can get the funds.”

In her day job, Peg is a one-woman association management company. “I do work for a scholarship group and a business association. When the volunteers get tired of working, that’s when the associations call me.”

The Fun of Hard Work

Peg says working and volunteering with Back Country Horsemen of America has been an adventure. “Right after I first joined, all of Back Country Horsemen of Washington was involved in organizing an event for the Washington state centennial: horse-drawn wagon trains traveled from five different points in the state and all met in Olympia, the state capitol. I got to help with that and even ride some of it for a few days. It was a lot of fun.

Why does Peg love Back Country Horsemen of America so much? “I love the trails and I love the horses,” she says. “It takes both to do what I want – to be riding out in the back country, enjoying the peace and quiet, seeing nature as it is. BCHA makes that possible. They have it all; I felt like I was home when I found them.”

Peg has big dreams for Back Country Horsemen of America. “It all started with a handful of men sitting around a campfire, concerned about losing horse access to trails… and we’re still concerned about that today. We’ve come so far, and I like to think of myself as a support that helped along the way, but there’s still so much to be done.”