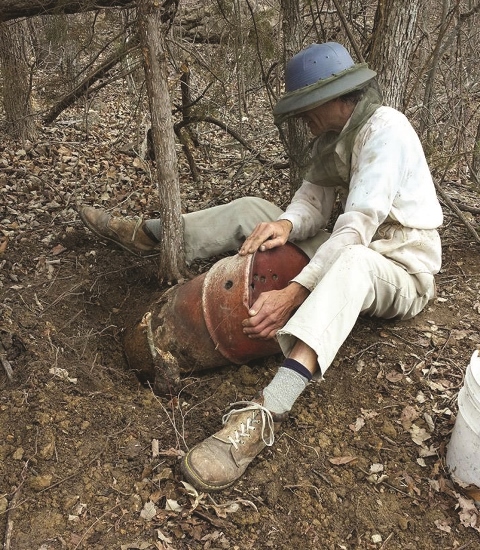 Back Country Horsemen of America preserves our right to ride horses on public lands, and seeks to inspire respect and appreciation for the wild lands that are fast disappearing. Those untouched landscapes and everything in them are a valuable resource, even the insects.

Honeybees are responsible for the pollination of around a third of our country’s crop varieties, such as fruits and nuts. But for much of the last decade, beekeepers have been losing 30 to 50 percent of their hives to colony collapse disorder. This alarming decline threatens agriculture not only in the United States, but across the world. Governments and other entities encourage all of us to take practical steps to slow this trend, such as avoiding the use of pesticides and protecting or starting beehives.

Diana Skinner and Susan Lechtenberg, charter members of the newly formed Back Country Horsemen of Kansas, discovered a honeybee hive near the Spirit Trail, one of the South Shore horse trails at Clinton Lake, just west of Lawrence. This colony of bees had built their hive in an old 30 gallon metal drum that was mostly buried in the ground.

Because the bees were beginning to swarm, Diana and Susan decided to enlist the help of an expert in removing the hive to prevent horses and humans from suffering stings in the future.

Richard Bean from Blossom Trail Bee Ranch in Baldwin City came to in­vestigate. They hiked about a mile up the trail with Richard’s bee gear, including a sting-resistant suit, hat with veil, shovel, burlap sack, twine, and hive smoker. He used an interesting combination of hand packed dryer lint, dried pine needles, pecan shells, and a couple of sticks as kindling for the smoker.

They cut a few small pine trees to give Richard room to observe the bees. Although honeybees do not usually nest in the ground, he confirmed that they were indeed honeybees. Wearing his protective clothing, Richard shoveled gently around the barrel to pull it out while Susan watched from a safe distance. They waited about a half hour for the bees to return to the hive. After finding the barrel too heavy to carry out by hand, they transported it to the trailhead in a wheelbarrow.

Thanks to Back Country Horsemen of Kansas, the Spirit Trail honeybees are enjoying their new home at Blossom Trail Bee Ranch. Richard tried to transfer them to a traditional beehive, but most of them continue to use the old barrel.

Although honeybees generally aren’t aggressive, some folks can have a life-threatening allergic reaction to a single sting. Relocating the hive to a place where they aren’t a danger to people and domestic animals preserves the safety of the trail and protects the bees we depend on to pollinate our crops.