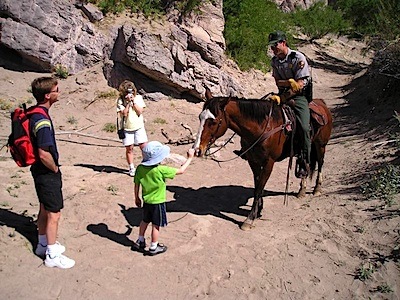 Public opposition has led Bryce Canyon National Park officials to drop their proposal to require all private horse groups to hire a guide to ride in the park. Instead, rangers will provide more information to private groups on safety procedures, specifically on areas requiring one-way traffic.

Last spring the park announced plans to require guides, starting at $100 per rider, for private groups, citing safety concerns. Park officials attributed the need for this guiding service to “avoid trail conflicts and ensure the safety of all users on the park’s steep, narrow trails. Those trails offer limited space for stock groups to pass. When unfamiliar groups of stock pass each other they can spook.”

Now, after a public comment period, park officials have withdrawn the guiding requirement and replaced it with one focused on trail etiquette.

“Changes are intended to ensure the safety of all visitors and to protect park resources,” Kathleen Gonder, the park’s chief of interpretation and visitor information, noted in a press release sent out Monday. “Trails open to horseback riding are steep and narrow given the terrain below the canyon rim and offer limited space for stock groups to pass. It is the intent of the park, the trail ride concessioner and private equestrian users to promote, and be proactive in, equestrian safety and safe trail use.”

Under the new rules, which take effect February 1, rangers will discuss safety procedures, Leave No Trace information, and trail etiquette during private equestrian groups check-in. They also will provide greater emphasis on trail directional routing (one-way only), areas of steep or narrow trails, and the area with two-way horse traffic.

“Approximately 400 individuals or organizational representatives responded and provided comments via mail, phone, and principally by e-mail,” said Bryce Canyon Superintendent Jeff Bradybaugh. “With expert assistance from the park’s trail ride concessioner and officers from Backcountry Horsemen of Utah, the park has analyzed the issues and public comments and has devised solutions.”

The park added that scheduling for private riding parties was recommended by most respondents and “will be used as a technique to avoid potential crowding, encounters with concession rides and to help alleviate associated safety concerns.” Departure times for private equestrian groups from the concession day corral will be: 7:30 a.m.; 12:30 p.m.; 4:30 p.m., and every half hour thereafter up to one hour before sunset. Private equestrians will be required to schedule their ride for one of these times at least 72 hours in advance by contacting the park via e-mail: BRCA_Information@nps.gov

Trail routing will not be changed. However, additional signage will be used to assist equestrians in route finding where trails intersect and to provide users with directions for safe flow. Scheduling of both private equestrian rides and concession trail rides will be used to minimize two-way encounters of groups moving in opposite directions on the portion of the trail between the Rim and the head of Binkie Hollow (Falling Rock) and to maintain safe separation of groups on one-way sections, particularly on the west side of the Peek-a-Boo Loop where the trail is exceptionally steep and narrow.

The following requirements will be in place for the park and apply to concession, privately-owned, or NPS-owned or contracted horses and mules:

* All stock brought to the park that originate from outside of Utah must have a Certificate of Veterinary Inspection (valid for 30 days) and the certificate must show a negative Equine Infectious Anemia (Coggins – AGID or ELISA) test within the past 12 months.

* Utah equestrians must certify that their animals have not left the state in the past six months; otherwise the requirements for Certificate of Veterinary Inspection and a negative Coggins test will apply.

* Utah law requires that owners of any horses being transported within Utah, whether originating in Utah or from another state, must carry proof of ownership. Approved forms of proof of ownership are found at the Utah Department of Agriculture and Food website: http://ag.utah.gov/animal/animal-identification/36-animals/238-livestock…>

Proof of ownership will also be used to verify the requirement for a Certificate of Veterinary Inspection and Coggins testing, for out-of-state horses.

* Rangers will check the documentation described above prior to stock being allowed in the park and equestrians will be required to provide proper documentation and certify that their stock meet these requirements.