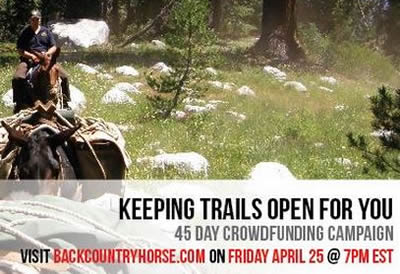 While the money is important and will greatly contribute to BCHA keep America’s trails open, there were probably greater benefits to be gained from this campaign than the immediate injection of capital. Benefits that will be worth much more in the future

The first is public awareness. Over 7000 individuals viewed the BCHA campaign page. Many of them had never heard of BCHA and our efforts before visiting the web page.  Now they do and they’ll tell others about us as well.

There’s also media awareness. In promoting the campaign the fundraising committee contacted many national publications and hundreds of web sites and Facebook pages, asking people to look at the campaign and hear our story. Whether people visited, or contributed, may in the long run, be less important than seeing our face and name in a magazine or on a web site.

Another benefit of the successful campaign is the relationship building that occurred is going on in its after math. The success of our campaign demonstrated to other like-minded NFP and professional organizations that BCHA can get the job done. That we have the support of our members and our message resonates with the public at large as well.

There are additional benefits that will benefit us as we go down the road. Knowing in advance that we would need a more polished and professional image if we were going to reach our goal drove us to address some long-standing internal issues. Through our chairman’s vision and direction, and the work of volunteers, BCHA now has a new web site and a new brand that present a strong and dynamic impression of the organization. We now have a consistent, cohesive message our states and chapters can use in recruiting new members and building their own relationships.

All of these things will benefit BCHA long after the money we raised is spent. Thanks again to all the volunteers and contributors who made this happen.