Back Country Horsemen of America has been keeping horses on America’s trails for 40 years. An organization that began with a handful of members in one western state has spread clear across the nation to include 26 states, 11 of which are east of the Mississippi. It seems fitting that the new Chairman in their 40th year is Jim McGarvey, a horseman from Calhoun, Georgia, BCHA’s first Chairman from east of the Rocky Mountains. 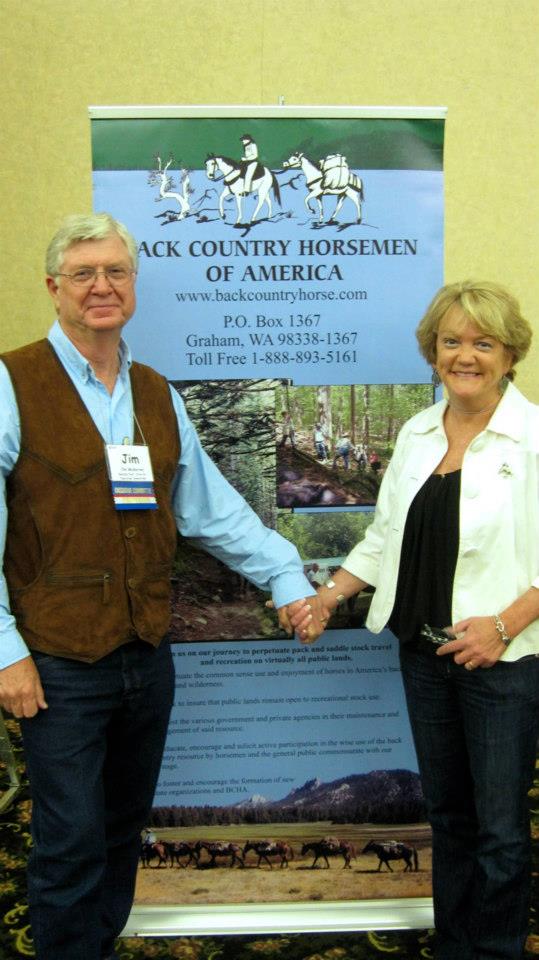 A Track Record of Success

He comes to Back Country Horsemen of America as an accomplished businessman. As co-founder and CEO of BenchMark Consulting International, Jim built “the smallest company with the biggest clients in the world.” Its fifty professionals specialized in bank operations consulting to major financial institutions on six continents, identifying and implementing world class best practices. These clients included 48 of the 50 largest U.S. banks and the lending arms of the 15 largest automakers and other industrial corporations. After twenty years, BenchMark Consulting International was acquired in August of 2000.

Jim served as Executive Director of Auction America Corporation, which grew to be the second largest antique automobile auction company in America, with over a dozen auctions annually across the United States. At age 28, he helped put the company together from scratch, managing day to day operations including advertising, financial settlements, event preparation, and buyer-seller satisfaction. The company even held a thousand car auction in Los Angeles that was recorded for television. Auction America, one of whose important shareholders was Russ Jackson, is now part of the historical development of the Barrett-Jackson Auctions as seen on the Speed Channel.

One of Their Own

A trail rider for the last three decades, Jim also takes his new position with a wealth of leadership experience in Back Country Horsemen of America. It began when he became a founding member and Vice President of Back Country Horsemen of North Georgia and, in the following year, took on the role of President. With the help of BCHA leadership and alongside numerous trail riding organizations, he led a several months-long effort of positive discussions with the US Forest Supervisor to reinstate cross-country access to horses in the one-million acre Chattahoochee-Oconee National Forest.

Plan for a Bright Future

Working with the BCHA Executive Committee, Jim has outlined a plan for moving BCHA into new expanding accomplishments in the next 40 years. This year, Back Country Horsemen of America has over 13,000 members, the highest in the history of the organization. Jim wants to see that number continue to climb. Along with more members, he expects an increase in BCHA’s already astounding contribution of volunteer work.

But it takes more than fixing trails and removing fallen trees to keep horses on our public lands. Equestrians need to work with the US Forest Service, speak with our congressmen, coordinate with land managers, team up with other trail groups, and attend planning meetings to be sure horses are included. BCH folks across the country already do this extensively in many ways, and Jim encourages members to step up their efforts on the local, state, and national levels.

Back Country Horsemen of America groups boast some very skilled crews who spend their own money on equipment, fuel, and travel to put their expertise to work maintaining trails for the benefit of all trail users. BCHA’s new Chairman recognizes that those skills are becoming more valuable as federal and state budgets shrink. It would be easier but far too costly to deliver workers and equipment by helicopter to the remote areas that need maintenance. The ability to pack equipment and materials on horses is sometimes the only way in areas where motorized vehicles are prohibited. Jim wants to see more members learning those skills, adding to the skills they already have, and putting them to use where our trails are in most need of repair.

Jim’s plan also includes spreading the word about how Back Country Horsemen of America works for you, and for every individual who enjoys our beautiful land by horseback. It’s hard to believe, but there are still horse folks who haven’t heard of BCHA and all the ways they’re keeping horses on trails from coast to coast. Back Country Horsemen of America extends an invitation to equestrians across the nation to join them in protecting our right to ride horses on public lands.

BCHA is a non-profit corporation made up of state organizations, affiliates, and at-large members. Their efforts have brought about positive changes regarding the use of horses and stock in the wilderness and public lands.