No matter how often we maintain our trails, they are subject to the whims of Mother Nature. The hard working folks of Back Country Horsemen of America are always ready to work together to clean up the messes Mother sometimes makes.

If you live and ride in Washington State, you probably remember the late spring windstorms of 2011 that left behind extensive damage, including countless downed trees. Some popular trails in the Alpine Lakes Wilderness were left completely impassable to horses.

Many Hands Get the Job Done 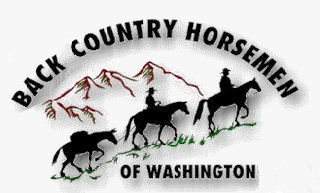 The Alpine Lakes Trail Riders Chapter of Back Country Horsemen of Washington did some small log-outs that summer. But they quickly realized the immensity of the downfall would require more equipment, more volunteers, and more horsepower. Then they learned from the Cle Elum Ranger District of the US Forest Service that some of their favorite riding trails might stay closed for a couple of years due to a shortage of staff to clear the downed trees.

With BCHA’s typical “can-do” attitude, the Alpine Lakes Trail Riders Chapter applied for a grant from Back Country Horsemen Foundation of America. Not only did they obtain the grant funds, the chapter also received substantial support from fellow Back Country Horsemen of Washington chapters.

Before the clearing could begin, they needed specialized crosscut saws and other equipment necessary for removing large downed trees. Through members of other BCHW chapters, the Alpine Lakes Trail Riders found everything they needed. From John Starling, a knowledgeable saw man, they purchased two saws suitable for the task. Lewis County Chapter member Jim Thode supplied plastic scabbards for the saws, and the skillful folks at Don Bacon’s Leather Shop made straps and quick release hooks to hang the scabbards from a saddle.

A 6000-pound high-lift jack was modified so it could be used to pull the cut log sections off the trail. A few chopping axes, wedges, and a peavey (a hook made specifically for handling logs), and the Alpine Lakes Trail Riders, led by member Jason Ridlon, were ready to get the job done.

Although the work was scheduled to begin on Waptus Pass Trail #1329 in mid-July, winter stayed late. Not to be deterred, a group of Alpine Lakes Trail Riders rode to snow line, then snow shoed in with the saws and other equipment on pack frames. They cleared about two miles of the trail, leaving the saws and equipment for the next weekend.

After a week of warmer temperatures, the Alpine Lakes Trail Riders were able to get their horses deeper into the wilderness. They worked alongside members of the Northwest Youth Corps on Waptus Pass. Three ALTR members stayed on the first two miles of Polallie Ridge Trail #1309 for three days and logged out 80 trees. Working closely with the US Forest Service, other members cleared Escondido Lake Trail #1320, removing 30 windfall trees by day’s end, once again opening the trail to stock.

Back Country Horsemen of America recognizes the resourcefulness, organization, and hard work the members of BCH Washington invested in getting this accomplished. This monumental project benefited equestrians and other trail users alike, but it could not have taken place without horses. The Alpine Lakes Wilderness area is one of the most popular outdoor recreational areas in the State of Washington, but because of its wilderness designation, no wheeled or motorized equipment such as off-road vehicles, four-wheelers, motorbikes, or even bicycles are allowed. There is no substitute for good old-fashioned horsepower!

BCHA is a non-profit corporation made up of state organizations, affiliates, and at-large members. Their efforts have brought about positive changes in regards to the use of horses and stock in wilderness and public lands.